The Crash of Ruin

In the ruined Europe of World War II, American soldiers on the front lines had no eye for breathtaking vistas or romantic settings.

The brutality of battle profoundly darkened their perceptions of the Old World. As the only means of international travel for the masses, the military exposed millions of Americans to a Europe in swift, catastrophic decline.

Drawing on soldiers’ diaries, letters, poems, and songs, Peter Schrijvers offers a compelling account of the experiences of U.S. combat ground forces: their struggles with the European terrain and seasons, their confrontations with soldiers, and their often startling encounters with civilians. Schrijvers relays how the GIs became so desensitized and dehumanized that the sight of dead animals often evoked more compassion than the sight of enemy dead.

The Crash of Ruin concludes with a dramatic and moving account of the final Allied offensive into German-held territory and the soldiers’ bearing witness to the ultimate symbol of Europe’s descent into ruin–the death camps of the Holocaust.

The harrowing experiences of the GIs convinced them that Europe’s collapse was not only the result of the war, but also the Old World’s deep-seated political cynicism, economic stagnation, and cultural decadence. The soldiers came to believe that the plague of war formed an inseparable part of the Old World’s decline and fall. 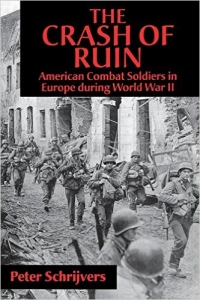