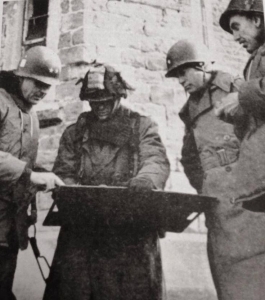 My areas of expertise are the Battle of the Bulge, the liberation of Europe in 1944-45, the American experience in World War II, and United States history more broadly.

I have in the past been involved in a variety of capacities in many exciting projects that range from the exhibition Texas to Bastogne (with Texas A&M University and Tempora) to television documentary The Real Band of Brothers (with Belgian television network VRT) and radio documentary The Battle of the Ardennes (with Dutch radio and television network VPRO). One of my consultancy highlights has been my contribution to Ten Oorlog II, an original ten-part series on World War II that became a television phenomenon in Belgium with record numbers of viewers for a documentary program.

In Australia I served as a member of the committee that developed strategy for the Center for Armed Conflict and Society and its projects for the 75th anniversary of World War II. For several years I have been working also as an historical advisor for the Adoption Foundation at the Margraten American Cemetery and Memorial in The Netherlands, whose public outreach has been widely covered in the American media, including The Washington Post.

Rooted in these multifaceted and international experiences of producing history for broad and diverse audiences, my consultancy services span everything from research and story conceptualization to narration and fact-checking.

“Schrijvers is one of the most promising scholars of my generation to study the history of World War II.”

“This is an important book, not only about World War II but also about the nature of war itself.”